Primary school girls in Mawabeni school are showing interest in Science, Technology, Engineering and Mathematics (STEM) as 11 girls out of a total of 16 students scooped prizes for best Mathematics student in each of the seven grades. 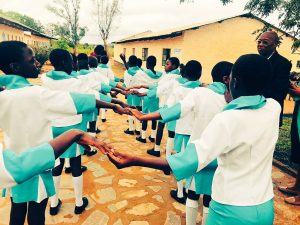 Young girls performing during a speech and prize giving ceremony that was recently attended by Women’s Institute for Leadership Development (WILD) at a school in Mawabeni.

It was all dance, music and ululation as parents, teachers and peers gathered to celebrate academic excellence. To support excelling students, Women’s Institute for Leadership Development (WILD) offered prizes to the best Mathematics pupil per grade.

The school’s headmistress Mrs Masiyane said the school has a high enrolment of 1016 students up from 985 pupils last year, and students continue to excel in spite of other potentially deterring factors.

“There is a shortage of classrooms but we are happy that the overall school pass rate has increased. It has been following an upward trend moving from 15 percent in 2013 to 40 percent in 2017. We have high hopes this year that children will perform better than last year,” said Mrs Masiyane.

“We have a fully furnished computer laboratory but we are short staffed as we have one teacher who teaches all students from grade one to seven,” said Mrs Masiyane.

Masiyane pleaded with parents to pay levies for their children citing that the school is owed a total of $180000 from the year 2016.

“This hinders efforts to improve the school,” she said.