On the 4th of December 2020, Women’s Institute for Leadership Development (WILD) facilitated a training with journalists from print, broadcast and online media with the aim of facilitating fruitful engagement on matters of GBV reporting. The training was attended by a total of 38 journalists drawn from broadcast, online and print media houses with the aim of understanding how gender sensitivity is maintained in news stories.

The training created a platform to assess the level of reporting in newsrooms and how journalists can use their roles to educate, inform and entertain the masses while disseminating information on Gender-Based Violence (GBV). Facilitating the training was Sibusisiwe Bhebhe, who is the Editing Director at Amakhosikazi Media cautioned journalists to be on the lookout for maintaining objectivity whenever they are reporting about Gender-Based Violence (GBV) cases.

It was cited that it is never ideal to reveal a victim’s identity in a case of violence, particularly sexual violence. It is never advisable for journalists to describe how a victim was abused such as stating the exact details as it may deter other victims from revealing their stories.

An advocacy story makes it difficult for journalists to be as objective as anticipated. In reporting about Gender-Based Violence (GBV), journalists should always make it a point that there is impact in a news story that seeks to increase awareness on GBV. In handling an interview with a victim, the environment should be taken into consideration as it can trigger memories that are related to the violence. 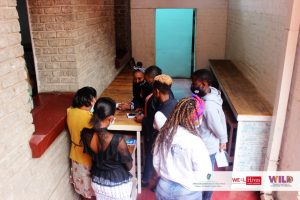 There was a discussion about whether or not it is imperative for journalists to interview perpetrators of GBV for media coverage. Journalists present for the GBV training cited that most of the time culprits either are not keen on being interviewed due to several reasons.

“Court proceedings deter perpetrators from being open for interviews due to court proceedings that will be underway, as they may fear that commenting on the matter could affect the ruling,” said one journalist.

During the training, a heated debate on reportage of stories on GBV inflicted upon men, with men citing how difficult it becomes for men to open up on abuse. Journalists were encouraged to make a deliberate effort to publish stories that are issue driven.