In a heated social media discussion, young women stressed the need for more education to be mainstreamed on Gender-Based Violence as they are the greater constituency affected by the ‘pandemic.’ This was highlighted during a GBV Girl Talk that was facilitated by Women’s Institute for Leadership Development (WILD), this morning.

Today’s GBV Girl Talk was a follow-up to a plea made by young women, stating how their voices are not being adequately amplified in the conversation on the violence of women and girls.  The GBV Girl Talk was also taking place on WILD’s social media accounts, Twitter and Facebook, respectively. Young women present for the GBV Girl talk spoke about cases of violence in the workplace and how it affects them.

“Fast food outlets are known for carpet interviews and young women usually become the victims as they seek employment opportunities,” said Miosha Mhute, a young woman who was at the WILD office for the GBV Girl Talk. “Once a young woman succumbs to a carpet interview, they would have opened themselves to a possibility of being sexually abused.” 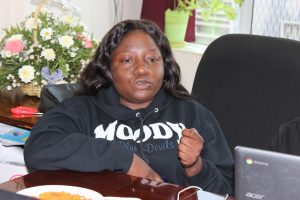 Commenting on the Facebook Live Video, Watchman Trust stated that patriarchy and male chauvinism is what is needed to deal with especially in Africa.

The trust reiterated that “until we start recognizing and acknowledging the efforts of women in the economic development of our societies instead of only acknowledging them in their roles at home Africa will still remain behind.”

Victims of Gender- Based Violence (GBV) shy away from talking about it due to economic reasons such as a fear to losing employment.

A comment from @citezw read: “People suffer silently at their workplaces in fear of losing their jobs. There is need for external structures to be set up for employees to discuss their concern.”

In a research, Gender Society recommends GBV to be incorporated into textbooks due to the influence of the women’s human rights movement and the radical feminist reframing of the subject as a human rights violation, as well as the incorporation of taboo topics around sex into the school curricula.