Female informal traders who operate in the vicinity of the Council bathrooms located on Fife street and Fifth Avenue in Bulawayo are now benefitting from a safer, cleaner and women centered bathroom facility after two civil society organizations refurbished the bathrooms to include a user friendly nappy changing counter, a sanitary pad dispensing chute and modern non-slip floor tiling. 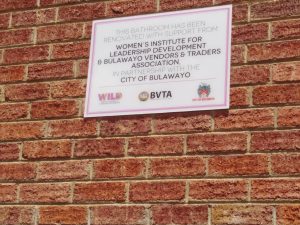 The bathroom was officially handed over to the City of Bulawayo, yesterday afternoon by Women’s Institute for Leadership Development (WILD), Bulawayo Venders and Traders Association (BVTA).

The renovations also  involved the changing of the floor from cement to ceramic tiles, addition of a sanitary chute for disposing sanitary pads, addition of a nappy changing counter for women with children, repairing of the toilet flushing system and addition of metal grating  to ensure that waste water from the toilets does not flow to the streets. 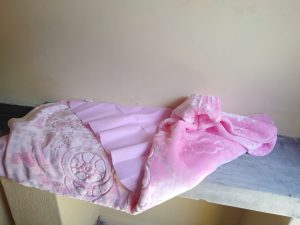 A nappy changing area where lactating mothers can utilize for their babies.

The bathroom  is located along Fife Street and Fifth Avenue, which is the closest convenient room for female informal traders and citizens. The women’s toilet was renovated following the eventful activities that were held throughout the 16 days of activism against Gender Based Violence (GBV), following a realisation that during the lockdown period, women informal traders were exposed to danger as they used undesignated places as convenience rooms.

Speaking during the handover ceremony, the Executive Director of WILD, Samukeliso Khumalo, said the renovation of the bathrooms is meant to create a safe space for women operating in that area.

“We have renovated this facility to create safe spaces for female informal traders operating in this market area. There are places where women can change nappies, for those who have babies. And we hope that women will feel safe in using this toilet.”

Khumalo urged citizens to be responsible in order to keep the toilet in good shape and fit for use by all.

“We want to promote responsible citizens who are keen on doing good for the community. In as much as we are demand accountability from the authorities, I also urge all citizens to take part by being responsible,” she urged.

Bulawayo Vendors and Traders Association (BVTA) Executive Director, Michael Ndiweni said the City of Bulawayo  should provide good infrastructure for female informal traders who were affected by the relocation from the Central Business District to various locations near their homes.

“We are lobbying the City Council to  provide good infrastructure at locations where traders were relocated to. We also want to give them good working spaces such as this one to ensure that they trade well,” he said.

Speaking on behalf of the Mayor, The Deputy Chairperson of the Health, Housing and Education Committee Alderman Monica Lubimbi said the number of women informal traders operating along the market area was high and the rehabilitation was going to improve their operational conditions.

“The number of women in the informal sector is high and the rehabilitation of this women’s toilet will improve their operational conditions and reduce the risk factors that have been brought about by the COVID-19 pandemic.

Non-slip floor that has been included as part of the renovations at the women’s toilet.

“I urge residents against vandalism and to keep the toilet clean and in a state that can be maintained,” she said.

A vendor who identified herself as Rachel Ncube said she was grateful as their productivity and operational levels were affected by lack of access to clean and gender responsive toilets.

“We are grateful to the two organizations that have provided a safe space for us to operate in. We can now be more productive because we no longer have lack of access to clean toilets as an excuse,” she said.