Bulawayo young women on Friday (26 July 2019) demanded accountability and feedback from Matabeleland South, Bulawayo and Matabeleland North parliamentarians, on the implementation of devolution of power and the Marriage Bill.

The discussion gave insight on devolution of power and explored the opportunities for young women to be involved. Over the past month, there has been an outcry over the Marriage Bill of 2017. The platform also gave perspective around the new Marriage Bill stating the negative and positive impact the bill is likely to have on young women if passed into law. 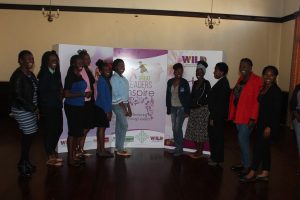 Young women pose for a photo during the meeting.

Young women also got an opportunity to build their self-confidence to participate in community and national processes.

Sindiso Dlamini, a young Devolution Champion raised concern on the delayed implementation of devolution of power citing that although government has allocated funds for implementation of Chapter 14, there needs to be a clear outline and timeframe.

Dlamini is part of the 30 other young mentees who are part of WILD’s mentorship programme.

The dialogue provided a space for reflection, listening and exchange of ideas between young women and policy makers.

Since 2017, WILD has prioritised capacity building through mentorship programs which provide a platform for sharing ideas among seasoned female politicians, and imparting knowledge to aspiring female candidates.

Speaking on the Marriage Bill, Maphosa said the marriage bill has been gazetted and awaits 14 days for it to come into parliament so that it is given a green light to go for public hearings and consultations

At the end of the meeting, young women identified their mentors and will be paired in the meetings that follow. The activity was a collaboration between Women’s Institute for Leadership Development and Youth Empowerment for Transformation Trust (YETT).