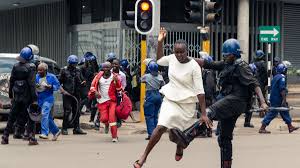 Women’s Institute for Leadership Development (WILD) is disheartened by reports of brutal attacks, physical assault, verbal abuse and emotional trauma that were inflicted by state security agents of the Zimbabwe Republic Police (ZRP) on women from Cowdray Park residential suburb. These varied forms of abuse were perpetrated upon members of the public, amid accusations of breaching the regulations of the nationwide lockdown. 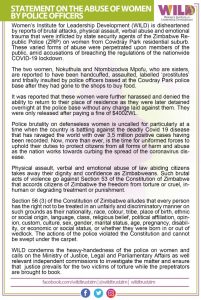 The two women, Nokuthula and Ntombizodwa Mpofu, who are sisters, are reported to have been handcuffed, assaulted, labelled ‘prostitutes’ and tribally insulted by police officers based at the Cowdray Park police base after they had gone to the shops to buy food.

It was reported that these women were further harassed and denied the ability to return to their place of residence as they were later detained overnight at the police base without any charge laid against them. They were only released after paying a fine of $400ZWL.

Police brutality on defenseless women is uncalled for particularly at a time when the country is battling against the deadly Covid 19 disease that has ravaged the world with over 3,5 million positive cases having been recorded, 1,2 million recoveries and 270, 000 deaths. Now, more than ever, is the time for uniformed forces to uphold their duties to protect citizens from all forms of harm and abuse as the nation works towards curbing the spread of the coronavirus disease.

Physical assault, verbal and emotional abuse of law abiding citizens takes away their dignity and confidence as Zimbabweans. Such brutal acts of violence go against section 53 of the Constitution of Zimbabwe that accords citizens of Zimbabwe the freedom from torture or cruel, inhuman or degrading treatment or punishment.

Section 56 (3) of the Constitution of Zimbabwe alludes that every person has the right not to be treated in an unfairly and discriminatory manner on such grounds as their nationality, race, colour, tribe, place of birth, ethnic or social origin, language, class, religious belief, political affiliation, opinion, custom, culture, sex, gender, marital status, age, pregnancy, disability, or economic or social status, or whether they were born in or out of wedlock. The actions of the police violated the constitution and cannot be swept under the carpet.

WILD condemns the heavy-handedness of the police on women and calls on the Ministry of Justice, Legal and Parliamentary Affairs as well as relevant independent commissions to investigate the matter and ensure that justice prevails for the two victims of torture while the perpetrators are brought to book.