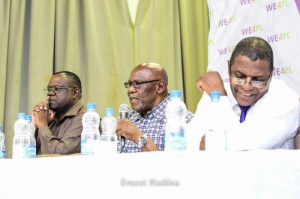 At the time of his passing, he was the president of Zimbabwe African People’s Union (ZAPU) and patron of the Dumiso Dabengwa Foundation.

Dr. Dabengwa leaves behind a powerful legacy as a strong champion for political freedom, democracy, strong state institutions and gender equality. His contribution during the liberation struggle is surpassed by only a few of his compatriots yet he suffered a prolonged and undeserved incarceration after independence.

He was among the few political leaders who spearheaded the inclusion of devolution in the 2013 Constitution of Zimbabwe, as a means of ensuring that all Zimbabweans benefit from resources in their localities.

His pursuit for equal opportunities between men and women saw him joining WILD in the implementation of the Women Empowered for Public Leadership (WE4PL) project that aimed at motivating women to enter into the “forbidden” leadership spaces without fear of victimization or intimidation. He supported women in ZAPU to participate fully in political mentorship, peace building and national healing programs provided by WILD.

To immortalize his contribution to society before and after independence, Dr. Dabengwa established the Dumiso Dabengwa Foundation through which he continued to share his vision for a better Zimbabwe. The Foundation seeks to carry out a number of developmental and humanitarian projects to help mitigate shortcomings in areas of human capital development, promotion of democracy and constitutionalism, leadership, governance and the welfare of ex-combatants.

He will be fondly remembered by many for his unbreakable ties with his revolutionary roots which he exhibited by turning his back on a system that was responsible for closing democratic space and the subsequent suffering of Zimbabweans.