Yesterday, Women’s Institute for Leadership Development (WILD) in partnership with Zimbabwe Electoral Commission (ZEC) conducted a voter education exercise in Mangwe Constituency in preparation for a By-Election that is slated for the 7th of September 2019. 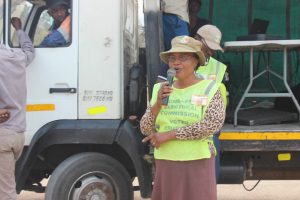 The aim of the voter education exercise sought to equip citizens resident in Mangwe Constituency with the necessary information relating to the election process, and documentation necessary on the day of the polls.

“In the up coming by-election, we advise citizens to uphold peace in whatsoever process that maybe done in the run-up towards 7 September 2019,” said Andrew Tlou, a ZEC Provincial Education Coordinator.

The Voter Education exercise enabled citizens to clarify electoral concepts that were difficult to understand, such as the process of selecting persons who are eligible to give necessary help to assisted voters on polling day.

Registered voters were encouraged to check if their names appear on the voters roll that will be out by the 5th and 6th of September 2019.