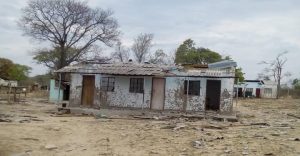 A cottage in one of the schools in Lupane that was destroyed by whirlwinds in 2019.Photo Credit: CITE

Families in Lupanda and Shabulanyana areas of Lupane were last week left counting their losses following strong whirlwinds that pounded the areas and blew off rooftops. Villagers in these areas fear that they won’t be able to repair their houses in time as the rainy season is approaching.

Priscilla from Shabulanyana area said a lot of families were left distressed following whirlwinds which blew off their rooftops leaving them with unexpected expenses. She said community members were grateful that no casualties were reported.

“Most rooftops here were blown away by strong winds last week. As affected communities we are glad that no one lost their lives or got injured,” she said.

She added that many families were struggling to put back their rooftops because of financial problems, highlighting that the approaching rainy season poses a risk to the destruction of their property.

“We are finding it very hard to repair our houses because we do not have money. We are now scared that when the rains come, we will lose our belonging as the rain will not spare our property. Most families here were affected and there is no way that you can go to your neighbor and ask for money when they also want to use it,” she added.

Another community member Nobuhle Nyathi said roofing material was sold in foreign currency and this has made it hard for them to purchase it.

“All building materials here including asbestos and other roofing material is sold either in Rands or United States Dollars. This has made the situation worse for us because we can not afford to buy these goods anymore. Those who have their monies have already started repairing, most of us are not able to do so because we do not have money,” she said.

In an interview, the Head of Public Weather Services James Ngoma said offset rains in October came with strong winds and even hailstorms. He urged villagers in Lupane to secure tight rooftops to avoid such incidences.

“The offset rains are always coupled with strong winds and in some cases hailstorms. People should be on the watch out around these times. Whenever the Meteorological department issues out the weather forecast, we urge people to be on the lookout and prepare for such weather patterns,” he said.

Ngoma added: “Houses which are constructed using stronger building materials are more likely to survive and vice versa. We urge people to use stronger building materials in order to avoid such dangerous occurrences. It is also important that people be taught on the direction in which they should build their houses so that even if the wind comes, there won’t be any harm done.”

Climate change-related disasters have escalated around the world, causing a serious threat to humans and their livelihoods. The effects of climate change have been visible in rural areas such as Lupane and have impacted negatively on food security, water, livestock, and human lives.