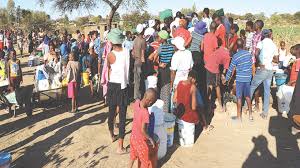 As the country is still grappling with the adverse effects of the coronavirus induced lockdown, Luveve residents’ portion of suffering seems to go unnoticed as an outbreak of typhoid and diarrhoea has claimed 13 lives. Several residents with typhoid are in local hospitals where they are fighting for their lives.

Civil Society Organisations (CSOs) in Bulawayo have taken a step towards investigating how these families in Luveve are coping in light of the unfortunate deaths of their loved ones. Bulawayo based civil society organizations have also visited four of the families and provided basic food such as mealie-meal, flour, cooking oil, beans, petroleum jelly, and soya chunks, to cater for their nutritional needs.

During the visit, families whose names have been withheld to protect their identities bemoaned the behavior and treatment they received from the local authority citing distress over the betrayal by their local leaders.

“I am so disappointed at the City Council because they have blamed the death of our loved ones on us,” said an aunt to the deceased. “Today some of their representatives came to ask us if we have rats in our houses as they might be the cause of the disease. This has left us disappointed and very hurt beyond what words can describe.”

“I am unaware of what they will be doing and all I am forced to conclude that Council does not have our best interests at heart regarding what has happened and what is still going on in our lives.”

Some residents narrated the last moments of their loved ones, citing shock over the unexpected situation.

“I observed that there was a change in the way that my relative was behaving, especially when talking to her,” narrated one resident who lost a family member to typhoid fever. “During her last moments, she appeared like a person who was losing her mind, something I do not understand until this day. I remember how I would talk to her on one issue and in response, she would be disengaged from my initial conversation with her. It was like a mental challenge that she was having.”

“There was an unusual swelling around her eyes that doctors could not explain, I wonder what triggered the swelling,” he further narrated.

Others cited that the medication they receive is also questionable, as a majority of people diagnosed with typhoid are requested to take a three-day course to ease the diarrhoea and pain.

“Residents who go to local clinics are given a prescription for medication that only lasts three days,” added one resident. “In worse scenarios, all you get is paracetamol despite that you will be suffering from diarrhea.”

Luveve residents implored the City Council to diligently work towards improving the supply of clean water meant for consumption, as there are fears that the death toll may escalate.

The bereaved families have been left traumatized, hopeless and have lost confidence in Bulawayo City Council’s service provision, with water being their main cause for concern. Residents are aggrieved and are still in shock that the City Council claimed that the outbreak was caused by storing water in dirty containers and fetching water from unclean and unsafe sources.