“The arts industry needs to create safe spaces for women to be free to nurture their talent, said Mimmie Tarukwana, a female artist who is based in Bulawayo.

These sentiments were raised during the proceedings of a radio discussion that was facilitated by Women’s Institute for Leadership Development (WILD) at Skyz Metro FM, on Wednesday. The radio program was held as a means to galvanising society to stand and advocate for the immediate elimination to the abuse of women as noted in the increase in sexual violence. 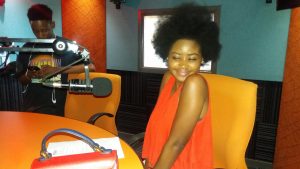 Mimmie Tarukwana, a female based artist during a radio program that was facilitated by Women’s Institute for Leadership Development (WILD).

“Producers and promoters take advantage of most female artists who want a chance to get into the industry and this tends to be discouraging,” added Tarukwana. “They hardly consider how good your track sounds in order for them to actually record and master it on time.”

Speaking during the interview, Mimmie revealed that as a female artist she faces struggles everyday as she is always overlooked by music producers, as they are continually in favour of male artists.

She went on to add that even if the organizer or promoter is female, there are minimal chances of supporting women who are in the business. Male artists are usually given more attention as they are said to have a wider fan base, as compared to their female counterparts.

Speaking on the drive to stop rape, Mimmie said that mothers should learn how to communicate with their sons and teach them on how to treat and value women.

Tarukwana urged women to rally behind each other and stand as a united front in the fight against Gender – Based Violence (GBV).