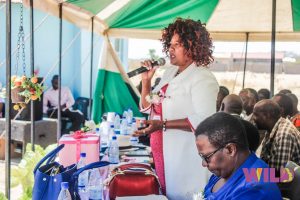 Luveve Constituency Member of Parliament Honourable Stella Ndlovu addressing a crowd at a gathering that was conducted in Cowdray Park.

The Credit Control and Debt Control Policy enabled various stakeholders present to discuss about residents to interact with service providers on matters that are now turning into a burden, thus impeding their ability to enjoy their social rights. The meeting also enabled stakeholders to hold an honest interaction on the Constitutional Amendment Bill of 2019.

Honourable Stella Ndlovu highlighted some of the celebrated sessions of the Constitutional Amendment (No.2) Bill of 2019, which preserve citizen’s rights, a prerequisite of any functional national Constitution.

However, concerns were also highlighted by the Honourable Member of Parliament on the possibility of violating the universal nature of the country’s proposed Constitutional Amendment Bill.

“Once the Constitutional Amendment Bill is approved, there stands a chance where the powers granted to the President enables his/her office to bypass cabinet and make decisions on his own, which echoes a disregard of democracy,” said Honourable Stella Ndlovu, Luveve Constituency Member of Parliament.

The Municipality stated the significance of implementing the Credit Control and Debt Collection Policy, stressing how it aims to recover outstanding Council debts which lead to poor service delivery in the residential suburbs.

The representative from Zimbabwe Electricity Supply Authority (ZESA) cautioned residents against illegal practices of wiring electricity within their households as it has lasting repercussions.

“Soon, ZESA will undergo door to door inspections as a means to bringing the ill practice to an immediate end,” stated a representative from the Zimbabwe Supply Authority (ZESA). “Litigation measures are also an avenue that we are considering that individuals who are responsible for illegal wiring in the community have escalated, which therefore, endangers the lives of many.”

Residents expressed utter disappointment from ZESA, as reported emergencies are not attended to at the most convenient time.