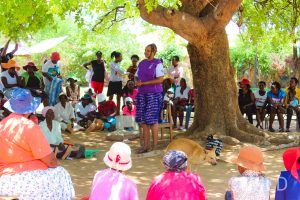 Bulawayo Ward 17 Councillor, Sikhululekile Moyo at a meeting that was facilitated by Women’s Institute for Leadership Development (WILD)

The aim of the laundry café and the public interactive art session was to create an accommodating environment where women could share their various understanding of Gender – Based Violence (GBV), as well as to shed light on mitigation measures that can be employed with the aim towards ending the prevalence in the ill practice.

“Our husbands get angry whenever we remind them of their responsibilities in the home, such as paying tuition fees for our children, or even buying food,” said Simangele Moyo, a resident from St Peter’s community.” I can’t have all the responsibilities when I am married,” she added.

Men are alleged to be continuously taking a back seat in providing for the family, citing the existence of gender equality as the reason for their behavior.

“Some women in our community find it hard to voice their concerns with their spouses,” said Sibongile Sibanda. “A significant number of women sadly share their stories when we are at female gatherings. It seems that whenever women make requests from their spouses, they end up being labelled as rebellious in the home, which a lot of them do not support.”

Harmful cultural practices further lead to the continuation of sexual violence between partners.

One woman cited how she is not afraid to do all that is necessary to preserve her marriage in spite the consequences that come with it.

Bulawayo Ward 17 Councilor Sikhululekile Moyo briefly spoke about the importance of playing an active role in the big flush, that was recently re -introduced by the Bulawayo City Council (BCC).

She also reiterated about water conservation and how women can do all that is within their jurisdiction to utilise water as the City is currently in a crisis.