We the undersigned Civic Society Organisations working on democracy and human rights, guided by the Constitution that allows all citizens to participate freely in politics, express our concern over the recent developments in Zimbabwe that pose a threat to such participation. Of note is the recent suspension of by-elections through Statutory Instrument 225A of 2020.

Citizens should be allowed to express themselves politically without restraint or compulsion from anyone or any political party. Political participation is one of the cornerstones of a constitutional democracy and which facilitates discussion on politics, running for office and electing candidates of one’s choice into political positions in Parliament or the Presidium. It means to do so freely according to one’s preference.

As civic society organisations we reiterate our position that the electoral process must remain guided by the Constitution and adhere to all full tenets of democracy enshrined in it that include the right to vote for a candidate of choice into Parliament.

We do not condone actions that seek to undercut constitutional principles on freedom of expression, good electoral processes and that quarantine democracy by removing procedures that are critical components in the meaningful democratic participation of citizens in the election of Members of Parliament.

We believe that the suspension of by-elections should have been a result of transparent multi-stakeholder consultations inclusive of voices from citizens, parliament, the academia, civil society, the private sector, trade unions, youths and persons with disabilities to ensure the fostering of trust in electoral processes so as not to further curtail the upholding of democracy in Zimbabwe. We find ourselves and the rest of the world battling the impacts of the COVID-19 pandemic but that alone cannot be the reason for such an action. In the context of the pandemic, we have seen our African brothers and sisters conducting or intending to conduct COVID-19 compliant presidential elections, particularly, Guinea, Cameroon, Mali, Benin, Burundi and Ghana that conducted Biometric Registration of 15 million voters in May. South Africa whose statistics of COVID-19 positive cases stand at 677 833 intends to conduct by-elections in November and yet Zimbabwe at 7 858 positive cases has suspended elections indefinitely.

It is worrying how Government can in one breath open the economy and schools whilst at the same time close elections in the context of the pandemic.

We implore the Government of Zimbabwe to create inclusive multi-stakeholder spaces for ongoing dialogue and collaboration which will lead to the holding of COVID-19 compliant by-elections to enable citizens to peacefully exercise their constitutionally enshrined political rights. Government should also stop enacting statutory instruments that undermine the spirit and letter of the Constitution. Dialogue and collaboration should be multifaceted and engagement mechanisms institutionalized for the provision of long-term input from non-state actors.

We urge the people of Zimbabwe to remain peaceful in the exercise of their civil and political rights provided in the Constitution.

We reiterate our position that there is need to strike a balance between health emergency responses and the respecting the supreme law of the land. The suspension of by-elections closes up what is left of the shrinking democratic space and undermines the civil and political entitlements of citizens.

We demand that elections in Zimbabwe be guided by the Constitution and call for the upholding of the rule of law. 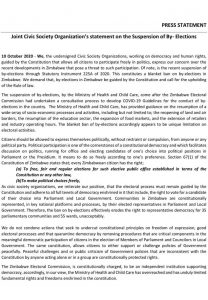 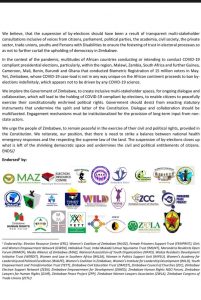