Women’s Institute for Leadership Development (WILD) joins the Global Alliance for Tax Justice and organisations around the world taking part in the Global Days of Action, March 8 – 22, 2020, to demand governments to make taxes work for women. This campaign launched on International Women’s Day (March 8th) and continues until the end of the 63rd session of UN Commission on the Status of Women (CSW). 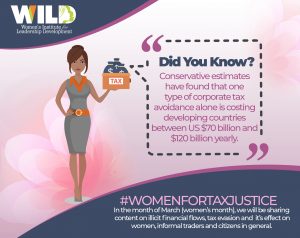 As the UN CSW convenes in New York to tackle the issues of social protection, public services and infrastructure for gender equality and women’s empowerment, women and tax justice activists across the globe call for tax justice to ensure that the resources and financing for the fulfillment of women’s rights are sustainable, just, and progressive.

As Women’s Institute for Leadership Development (WILD), we believe the country has reached a crisis point in the fight for women’s and girl’s rights. As a result, we’ve joined this campaign because the rights of women and girls around the world are being threatened by discriminatory global, regional and national tax policies.

In Zimbabwe, current laws and practices enable multinational corporations and the very rich to, in many cases, get away with not paying their fair share of tax. This denies our national budget a key source of funding for public services, such as healthcare, education and clean water, that is critical to realising women’s rights and gender equality.”

Globally, tax avoidance and tax breaks to big businesses cost developing countries hundreds of billions of US dollars every year – that could go a long way to transforming the lives of women and girls around the world.

Tax justice is vital to providing gender-responsive public services that can help reduce or respond to violence against women and girls, provide universal access to public healthcare, ensure more girls get a quality public education, and support women’s economic equality and reduce their unpaid care work.

Women account for the majority of the world’s poor. In addition to being disproportionately harmful to women and girls, current tax policies are also generally more beneficial to men. One example of this is how income tax policies in many countries are structured in such a way that tax deductions are more accessible to men, as they are implicitly recognised as the primary breadwinners. In contrast, current tax policies do not recognise the unpaid care work that is mostly carried out by women. Numerous taxes in Zimbabwe place an unfair tax burden on women as they spend a larger portion of their income to buy basic goods.

Organisations participating in the Global Days of Action are putting forth a number of recommendations at the regional and global level, including the establishment of an inclusive intergovernmental UN Global Tax Body where countries have a seat at the table and equal say in determining international tax rules – as opposed to the situation today where the global rules are written by an exclusive club of rich countries.

WILD, therefore, calls on the government to improve progressivity of national tax system, such as shifting the tax system away from indirect taxes such as VAT and sales tax and towards direct, progressive taxation of income, wealth, and ensuring that our national tax policies do not undermine tax bases of other countries and the entire citizens.

We are calling on governments to realise the macroeconomics commitments in the Beijing Declaration and Platform for Action specifically, on critical areas of women and poverty and women in the economy.

For more information on the global campaign, please see: