Hundreds of citizens in Bulawayo Metropolitan Province this afternoon attended the Constitution Amendment No.2 Bill of 2019 Public Hearings where citizens unanimously rejected the Amendment Bill citing that it is too early to amend a Constitution that has not yet been fully implemented.

During the public hearings, WILD submitted a position paper on the Bill, detailing the disadvantages of adopting the Bill and making recommendations that would benefit citizens. The paper was presented to the Portfolio Committee on Justice, Legal, and Parliamentary Affairs committee. 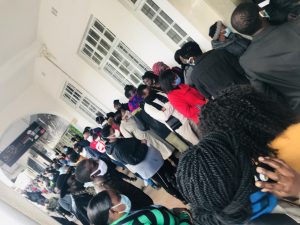 The Constitution Amendment Bill of 2019 was gazetted on the 31st of December 2019 and again on the 17th of January 2020 formally commencing the constitution amendment process.
During the hearing, residents in Bulawayo were all in consensus that there is need to extend the Public Hearings for the Constitution Amendment Bill as many Zimbabweans have not had an opportunity to participate due to the COVID-19 national lockdown restrictions.
The following issues were raised during the meeting:
Extension of party-list members of national assembly: Women’s Quota
Women unanimously rejected the extension of the women’s quota and the introduction of the youth quota, labelling these as tokenistic. Instead, they suggested that political parties should be compelled to ensure 50/50 representation and fulfillment of the provisions which are in sections, 17, 56, and 80 of the constitution which focus on gender balance, right to equality and non-discrimination, and rights of women respectively.
Youth Quota
A large number of the people who attended the public hearings, constituted young women who said parliament should look at other alternatives to facilitate youth participation in politics and governance. They said that adding more parliamentarians will result in a bloated parliament. Rather, they suggested that political parties should be compelled to reserve a specific number of seats for youths in their parties.
Abolition of Provisions for electing Vice- Presidents
Addressing the panel of the committee of justice, legal and parliamentary affairs, citizens said “government should not be run only by the President’s favourites.” Citizens said the running mates concept should not be removed before it is even tried in 2023. They said the running mates concept promotes participatory democracy as Vice presidents will be elected by the electorate rather than the president.
Appointment of non-parliamentary ministers
On the appointment of additional non-parliamentary Ministers, public hearing participants said there is no compelling reason for this proposed amendment as it will lead to exorbitance and unnecessarily increase public expenditure. Citizens emphasized the rejection of this amendment citing that the acceptance of this clause will lead to a bloated and overstuffed cabinet.
Limitation of parliament’s power to approve international treaties
Citizens highlighted that amending section 327 so as to reduce parliament’s powers will undermine parliament’s oversight role. Residents cited that signing of international treaties should not be done by the President alone but Parliament should be involved so as to promote transparency and accountability.
Promotion and Tenure of Judges
Residents said the promotion of judges by the President is an affront to democracy and judicial independence and can lead to pliant judges who are not independent siting in the highest courts in the country. They raised concern that the Bill’s intention to empower the President, who acting on the recommendation of the Judicial Services Commission will now have the power to promote judges gives a clear indication of the desire for consolidating the Presidents’ power, a move which will deeply compromise the judiciary’s independence. They labelled this situation as a “dangerous scenario.”
The Justice, Legal and Parliamentary Affairs Portfolio Committee is on a countrywide tour soliciting for citizens’ views about the proposals in line with provisions of the constitution.
At the beginning of the hearings,  attendees were told that they were free to speak in any of the official languages except for sign language as the team had not come with a sign language interpreter.
Citizens noted that persons with disabilities are being sidelined in Parliament, and highlighted that the quota system should also prioritise persons with disabilities.
The Chairperson highlighted that for the first time in the history of public hearings, citizens who were unable to attend the public hearings can now share their views on radio. He advised citizens to tune in to Khulumani FM on the 19th of this month from 8am to 10am.
The Portfolio Committee which came to the Bulawayo hearings was being chaired by Misheck Mataranyika.