Yesterday the 30th of October 2019, WILD joined other stakeholders in the commemoration of the International Day of the Girl Child at Ingwizi Business Centre in Mangwe District which was hosted by the Ministry of Women Affairs, Community, Small and Medium Enterprise Development. In attendance were various stakeholders including government departments, women’s organization, civil society organizations, members of the public and school children. The International day of the Girl Child was declared an annual event on the 19th of December 2011 and is celebrated on the 11th of October annually. This day is meant to recognize girls’ rights and the unique challenges girls face around the world. This day provides platforms for stakeholders to consider the importance of social, economic and political investment in the power of adolescent girls as fundamental to breaking the intergenerational transmission of poverty, violence, exclusion and discrimination of the girl child.

A representative from the Ministry of Women affairs, Mr P Gwavava said that there are expected benefits in recognizing the rights of the girl child. These include an increase in awareness and creation of an enabling environment for non-tolerance of all forms of gender-based violence nationwide, increased reporting of cases of abuses by the community and by the victims themselves and increased levels of information on the rights of the girl child. For the long term, he said that there are expectations of reduced cases of teenage pregnancies, reduced number of girls dropping out of school and an increased number of girls finishing high school and enrolling in tertiary institutions as a way of building their careers. 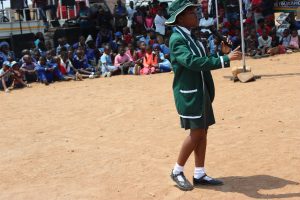 A school going girl from Bulu High School, Amanda Dube said education is not optional but compulsory for the girl child as a way of empowerment of the girl child. She also said girls deserve a better deal from the community and child marriages, school dropouts, discrimination and inequality and discouragement of the girl child should come to an end.

Seargent Nkomo representing the Ingwizi Zimbabwe Republic Police (ZRP) said the ZRP is committed to working towards the end to child marriages, child labour and child abuse whose effects are mostly felt by the girl child. “The ZRP is working tirelessly in bringing an end to practices that contravene the rights of the girl child”.

The guest of honour, Councilor Sindisiwe Nleya who is the chairperson of the Mangwe Rural District Council said that the local authority is committed to the movement towards ensuring that adolescent girls have the right to a safe, educated and healthy life. “If effectively supported during the adolescent years, girls have the potential to change the world” said Councilor Nleya

WILD shared a solidarity message that stems from the Organization’s vision, which seeks to see women and girls, at the core of econmic, political and social development and expressed commitment to the empowerment of the girl child for leadership development and economic empowerment. Through the mentorship program, WILD opens up opportunities for the girl child to be equipped for leadership in all spheres of society.

The day saw school-going girls being celebrated, encouraged and empowered as tomorrow’s workers, mentors, entrepreneurs, political leaders and all that they set out to do.