Female journalists in Bulawayo have called for increased awareness on provision of factual and verified information so as to avoid misinformation amidst a global pandemic. 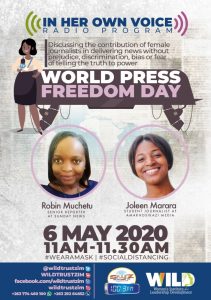 Speaking during a radio programme held as part of commemorations for World Press Freedom Day which focused on the contribution of female journalists in delivering news without prejudice, discrimination, bias or fear of telling truth to power, Robin Nyembezi Muchetu, a Senior Reporter at Sunday News Newspaper said the advent of citizen journalism has come with its disadvantages.

“People have mobile phones, they easily record what they see but it is important to have access to factual information from trusted sources and ensure verification of news. Citizen Journalists often post information that they see without verifying this information,” said Muchetu.

Speaking during the same programme, Joleen Marara, a student journalist at Amakhosikazi Media said in commemorating International World Press Freedom, this year’s theme “Journalism Without Fear Or Favour” shows that the whole globe is in unison towards the fight for press freedom.

“The theme is very significant because we are fighting against the corona virus global pandemic and the theme gives journalists the courage to report without fear and make sure that the whole globe gets information on time so that we are all informed on the latest developments to fight the corona virus pandemic.”

Marara said the media operational environment and democratic space has remained volatile as journalists who do not work for state media are not treated with respect.

“Journalists are constantly being harassed and tortured for doing their work. How then can we have the freedom when we have to defy the ethics? Laws such as Access To Information And Protection Of Privacy Act (AIPPA), Official Secrets Act (OSA), Interception Of Communications Act, Statutory Instrument 83 Of 2020 where false reporting during the national lockdown is criminalised, Section 31 and 33 Of The Criminal Law Code which criminalises free expression of the press has impeded journalists from doing their work. The MOPA which replaced Public Order and Security Act (POSA) stifles journalists’ freedom of expression, assembly and association,” she said.

Marara said the growth of independent media platforms has allowed for representation of more voices and this has actually worked as an advantage for the community women, persons with disabilities and other less privileged groups in the society.