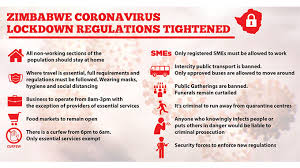 On the 22nd of July marked day one of the new normal, after the President, His Excellency, Emmerson Mnangagwa cited that all citizens where to abide by a 6pm – 6 am curfew, that is now being loosely termed as the “the dusk to dawn curfew”. While this is happening, citizens’ access to social services have been affected, and transport blues have re-emerged. Since the public announcement, thousands of citizens have been forced to resort to walking long distances to their homes as the challenge intensifies. Since the 22nd of July, businesses are now expected to operate between 8 am and 3 pm in the afternoon.

Women’s Institute for Leadership Development (WILD) has been monitoring the situation across its operational areas, inclusive of Bulawayo, Matabeleland South and Matabeleland North. Women in different communities are slowly normalising the shortage of basics, such as food, transport and health care services.

Gwanda
The Zimbabwe Republic Police have been monitoring and seeking evidence of exemption letters from citizens even when leaving for the supermarkets. In some instances, citizens are turned back despite the production of an exemption letter. According to residents, the aim of such behaviour has been attributed to the desire to depopulate the city centre and prevent the spread of the novel corona virus. Informal traders have been affected by this situation as they are now selling their wares at their homes.

Bulawayo
With the City leading in COVID-19 cases, tertiary institutions have been given a directive to cease their operations as the spread of COVID-19 is on the rise. National University of Science and Technology (NUST) has since announced the suspension of activities on campus for both staff and students, with effect from Friday 24 July 2020. All examinations after the 24th of July 2020 have been deferred till further notice. Students from Bulawayo Polytechnic have been asked to vacate their premises by the end of Friday 24 July 2020. Residents are now forced to walk home following the shortage of ZUPCO buses. Private vehicles are now charging five times the price of ZUPCO fares as they seek to maximise on stranded citizens. Military police have started manning roadblocks with some being observed along Plumtree road yesterday (Thursday 23 July). Police are also requesting travel authorisation letters. In some cases, citizens with letters are restricted from entering the CBD and told to go back home. Econet shops in Bulawayo are all closed as staff members in other branches reportedly tested positive for corona virus.

Plumtree
Citizens are adhering to lockdown regulations as instructed by the government. In the town’s central business district, citizens were seen standing in long mealie-meal queues and not observe social distancing while others were seen during the week wearing their masks around their chins. Citizens are adhering to the curfew. Police are conducting patrols in high traffic areas and arrest citizens who walk in groups without practicing social distancing. Citizens have also raised concern over the increase in border jumpers who are often not tested for COVID-19, citing that they could lead to an uncontrollable spread of the virus.

Lupane
St Luke’s Mission Hospital is currently offering essential services for those seeking health services from the medical facility. Medical staff are still working on a limited capacity as they declared incapacitation due to low salaries and shortage of medical supplies for patients who are being admitted.

Hwange
When stringent lockdown restrictions were re-introduced, security forces who had been deployed in the CBD instructed citizens to go back home way before the commencement of the curfew. Citizens are now leaving in fear and are following regulations so that they are not found on the wrong side of the law.