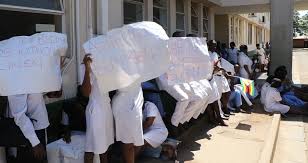 The USD$75 COVID-19 allowance for civil servants, that was issued out over a month ago has been met with uncertainties as it is being converted to the local currency before withdrawal.

Civil servants have reported that some banks are converting the allowance using the prevailing interbank rate and have accused their employer of being insincere in light of the prevailing economic hemorrhage coupled with inflated prices of basic goods and hyperinflation of over 700 percent.

An anonymous source told Infocus News that most banks were forcing civil servants to convert their COVID-19 allowances into Zimbabwean dollars when they preferred the United States Dollar, considering the ever-declining value of the local currency.

“I am a government worker and I have not been able to access my COVID-19 allowance. Banks are forcing us to change the USD$75 to RTGS (Real Time Gross Supplement), which is not fair because it merely amounts to $5 000 RTGS yet we want our money in the initial proposed currency.”

“Those who have domestic Nostro accounts are not able to use their cards because there seems to be a problem that we are not aware of,” she added.

Despite these sentiments by civil servants, the government is adamant that banks are ready to issue cards for use in shops.

Reports indicate that the Minister of Finance and Economic Development, Hon Professor Mthuli Ncube, late last month said: “The systems are ready for civil servants to get the USD$75 from the special foreign currency accounts which were opened. The process has been completed now and the banks have said they are ready to issue cards for use in shops.”

Hon Professor Ncube added: “However, we do not want individuals to withdraw cash from banks for the US$75 allowance because we are concerned as the government that it will end up in parallel markets.”

Civil servants responded by lamenting the transaction cost they incurred when purchasing using their banks cards or through their EcoCash accounts, saying it will limit the amount of goods they will buy in light of the pricey nature of goods and services.

“Right now, they want us to convert the money to RTGS but transaction costs are too high. This will result in people buying less because prices of goods and services are too steep,” said Mollet Mdlongwa*.

Civil servants have appealed to the government to put in place measures that will ensure that civil servants access their money on time and in the agreed stipulated currency.

*Not her Real Name