On Friday, the 13th of March 2020, Women’s Institute for Leadership Development (WILD) in partnership with Amakhosikazi Media, Bulawayo Vendors and Traders Association (BVTA), Bulawayo Progressive Residents Association (BPRA), and Centre for Innovation Technology (CITE) conducted an edition of The Public Opinion Space under the theme: “Government Taxation and Its Effects On Women In Zimbabwe“. 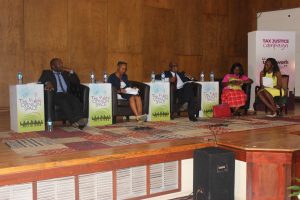 In attendance was the Reserve Bank of Zimbabwe (RBZ) Deputy Governor, Dr Khuphukile Mlambo, a business analyst from MoB Capital, Paulla Phiri, an informal trader, Jacqueline Ndlovu, and a representative from the Zimbabwe Revenue Authority (ZIMRA), who led in depth presentations on Tax Justice and to highlight the implications it has on women.

The Public Opinion Space was held as an observance of Women’s History Month as noted through the #Women4TaxJustice campaign that is currently being run throughout the month of March.

The Public Opinion Space offered a platform for open engagement between duty bearers and citizens at large, particularly on a subject matter that is hardly deliberated on. The following issues were raised:

Below are the key resolutions that were made during The Public Opinion Space: