Bulawayo residents were this morning appraised on the importance of the “big flush”, an exercise that has been introduced by the Bulawayo City Council (BCC) to reduce sewer blockages and burst pipes. 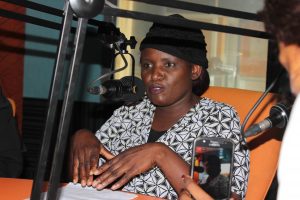 Khethiwe Tshuma at a radio discussion that was conducted at Skyz Metro FM.

These sentiments were raised by Ward 17 Councilor Sikhululekile Moyo during an edition of the In Her Own Voice radio discussion that was facilitated by Women’s Institute for Leadership Development (WILD) at Skyz Metro FM.

According to Bulawayo Ward 17 Councilor who is also the Chairperson of the Future Water and Action Committee for Bulawayo City Council (BCC):  “The ‘Big Flush’ is an exercise that was initiated in 2012 where residents were requested to simultaneously flush their toilets, at 0630 am and 0830 pm daily, in a bid to push sewer waste that would have collected and clogged the sewer pipes.”

She further cited that the “big flush” is necessary in spite of the ongoing water shedding. Moyo alluded to the fact that residents should reserve used water for flushing their toilets when it is time for the “big flush”. 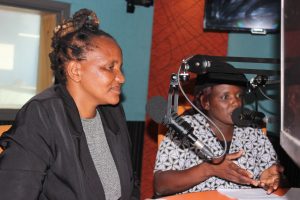 Khethiwe Tshuma, a vibrant community member from Entumbane brought to light some of the misfortunes experienced by women due to water shedding coupled with the geographical location of her home.

“Low lying areas in my ward are at an advantage as they are able to get access to water as compared to houses in steeper gradients,” said Khethiwe Tshuma. “We go to 4 – 7 days without water because we are at a higher lying area, and it is an inconvenience to us as women.”

Jacqueline Ndlovu, an active Mpopoma resident further spoke about her personal challenges that she encounters when trying to access water, particularly at a time when there is the 72- hour water shedding scheme.

“During the 72-hour water shedding exercise we are forced to beg from our neighbors for drinking water as other alternative sources have dirty water,” said Ndlovu. “There is a penalty within the City Council for excessive usage of water and I cannot continuously seek help from a neighbor to fetch clean water under such circumstances.”

“Most of the boreholes are located near sewer pipes, this is unacceptable, and we are aware of how outdated these pipes are,” reiterated Tshuma.

Residents said community boreholes go unserviced for too long and this exposes resident’s lives to unwarranted risk. Other wards have come with temporary solutions to the water shortages such as digging alternative sources through open wells in swampy areas.

“There is a case in Entumbane suburb where a child fell in one of the community’s open wells and drowned,” explained Tshuma.

Councilor Moyo implored Bulawayo residents to conserve water, and to ensure that leaks are reported on time as one of the ways to saving the 37% of water left in one of the city’s supply dams.