BULAWAYO – At least 30 women in the Provincial assembly structure staged a demonstration at the MDC Alliance Bulawayo Office, in a bid to influence the party to yield to their plea and observe gender equality in the Ward 8 Council seat. The women-led demonstration was accompanied by song and dance with displays of placards with messaging that called on the vacant seat to be won by a woman candidate following the demise of the Ward 8 Councilor in the month of July 2020.

During the primary elections, Infocus News caught up with Bulawayo Ward 17 Councilor Sikhululekile Moyo who was part of the women-led demonstration and cited the cause behind the opposing views.

“Our concerns are clear and should be heard and taken up by the party because we are tired of contesting for seats where males are willing to use the financial muscle to gain popularity and power of women,” said Councillor Moyo. “All we were doing was to level the playing field and we are noting that the ground is not equal when contesting in elections and that there is too much vote-buying by male candidates.

“Also noting as per agreement by provincial leadership that Ward 8 is a woman seat, our plea is for the seat to be retained by a woman as it had transpired during the 2018 harmonised elections,” added Councilor Moyo.

In an interview with one of the candidates, Lezina Mohammed said the party should fulfill gender equality in line with the Constitution of Zimbabwe.

“The late Councillor for ward 8 was female and because there are few female Councilors in Bulawayo, we would like the party to make the necessary effort and adjustments to enforce gender equality.

“I am pleased that the election has been postponed because this means there is hope for the upliftment of women leaders,” said Mohammed. “I saw an opportunity in these by-elections and felt I too can test the waters before the 2023 elections. My hopes are high and I hope the vacant seat can be won by a woman.”

Mohammed further cited the challenge that arises from contesting with male candidates who are in the business of flashing money to gunner votes from people.

“Contesting with a male candidate can be intimidating and our male counterparts are quick to use the brown envelope to get what they want from their opponents and as a woman it can be hard to be placed in such a position,” added Mohammed. “All I have is optimism as a first-time candidate but it is not a hidden fact that running alongside a man can be something that is really uneasy for most women leaders out there.”

In an interview, as party members waited for a verdict on whether the elections would go ahead or not, some of the female Councilors who were in attendance enunciated their support for female candidates citing that if the country is to achieve gender equality in leadership positions it should begin in internal party policies and the willingness of party leaders to enforce gender equality.

Speaking during the initially proposed date of the MDC Alliance primary elections, Bulawayo Ward 17 Councilor Sikhululekile Moyo cited that their plea as women was to have women contesting with each other in the soon to be held by-elections, especially in Ward 8.

“We are not pleased by the fact that men also want to contest the Ward 8 seat as we have seen, but what we are clamouring for is that the Ward be contested by women only,” said Councilor Sikhululekile Moyo. “We are delighted that for now, the party has temporarily postponed the elections, which gives us hope for actually seeing women have a chance to contest the vacant seat in Bulawayo’s Ward 8.”

“The demonstration was peaceful as can be and we made it a point that the messaging also brought our concern out in the open,” added Councilor Moyo. “Women stood in solidarity and that was our desire to see women stand for a cause that is empowering in nature.“

Women who opposed the MDC Alliance’s decision to conduct elections last Sunday currently await the verdict by the Party which will highlight whether or not women will be contesting on their own in Bulawayo’s Ward 8 vacant seat.

Meanwhile, primary elections will be held next Sunday at the Provincial headquarters although there still has not yet been clarity on the request raised during the protest that brought an election to an immediate halt.

Follow the link for a video of one of the candidates 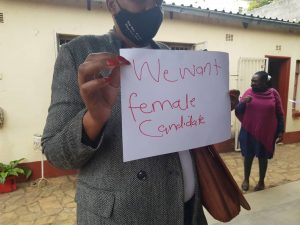 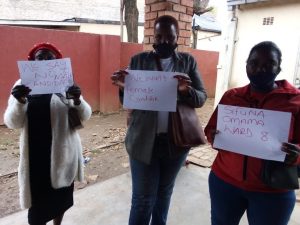 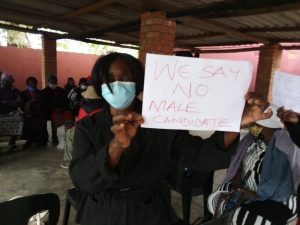